Saturday saw another family trip to Dubai, this time to check out the dolphinarium. The kids were very excited and have been wanting to go since they saw it on tv a few weeks ago. The dolphinarium is inside the children’s park, which we had never been to before but it was very impressive. It is on the water, huge grassed areas, lots of play equipment etc. There was also a children’s museum- looked a bit like the QLD Science Museum that we will go back and visit another day.

Clint and I were both fairly skeptical before  the dolphin and seal show, but I have to say it was pretty good. Went for just over an hour, although in some sections the compares seemed to be doing a bit of stretching. It is indoors (no surprises in this country) which was great for the atmosphere and you got to be so much closer to the animals then places like Seaworld.

Lachie enjoyed it but Charlotte was absolutely mesmerised, she had a huge grin on her face the entire time and kept saying it was ‘awesome’. Although when it was time to say goodbye to the dolphins the tears ran down her cheeks and she was sobbing as she didn’t want the dolphins to go!

For the first part of this term, Charlotte has been looking at nursery rhymes as their theme at school. As an end to the unit, they had a nursery rhyme dress up day where the children dressed up, did a parade and then lots of fun activities.

I was hoping she would choose something easy like Jill (grab a bucket and you are done) and dreaded her deciding on a sheep or something equally difficult- costumes are not that easy to source here! Thankfully she went with the rhyme Miss Polly, her only dilemma was whether to be Miss Polly or the Doctor. She changed her mind daily before finally settling on Miss Polly at 7pm the night before. 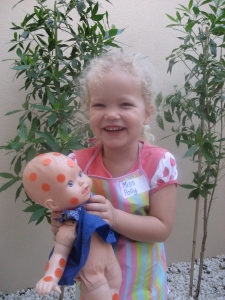 Vossy has nothing on us!

The kids have been doing Aus-kick (AFL skills) every Friday now for a few weeks. It is only a short season due to the weather… they play from mid September through till the end of February. At first Lachie wasn’t so sure but now he looks forward to it and enjoys it. Charlotte also joins in for most of the drills but by the time they play the game at the end she has had enough and tends to be kicking a footy with her friend Claire totally oblivious to the game going on.

The lead up to Halloween last year was very low as key as the children really had no idea what it was all about! However this year they have been counting down the days for weeks. Although I am fairly sure they don’t fully understand the traditions involved and are only in it for the candy! They chose their costumes early- Lachs as a wizard (you would think this would be an easy costume to find….. but it was a nightmare, luckily we found one in Dubai last weekend) and Charlotte as Mariposa (a Barbie fairy for those of you without young girls)! I was a witch and Clint went to the grand Prix for the afternoon.

The kids were so excited all day and couldn’t wait to get started. There were kids out everywhere, and the atmosphere around the compound was fantastic, there are about 400 villas in our area of the compound so there were plenty of houses to visit. But after about 90 mins the kids were done, they had enough candy and chocolate to feed an army and were getting tired of walking! (the house here are more spaced out then our previous compound).

After the trick or treating we headed to one of the common areas for some more fun. About 50 families got together for a bbq and some Halloween games for the kids. It was a great evening but an early finish as the kids all had school the next day.

Halloween is definitely one of the things the children will miss when we eventually move on!

Photos of my little wizard and Mariposa ready for trick and treat plus at the bbq afterwards. The kids loved the party games, especially turning their friends into Mummies with toilet paper.